Today’s Miracle Moment is about character. Think about the people you’ve known throughout your life whom you admire. My guess is, that you’d say they each have character.

When we think of our parents, a few of our teachers through life, some dear friends (including each other!), we think of people whose character we admire. Character is something we value and respect, and unfortunately we don’t see a whole lot of it these days.

When we develop our own character, our lives become more and more miraculous.

You know how there are days of the year honoring almost everything – there’s Mother’s Day and Father’s Day and Grandparent’s Day and Labor Day…and did you know that there is actually a day called Character Day?

Well, there is. It was on September 18th and more than 6,100 schools and organizations in 41 countries from Kenya and England, to China and Argentina celebrated it with character building activities.

Character Day was founded by Tiffany Shlain, an Emmy nominated filmmaker, who founded the Webby Awards. She is also the creator of the short film, “The Science of Character,” which explores the idea that character isn’t something static but something you can develop over time.

In her film she cites scientific research about how people either have a fixed mindset and they believe they’re born with certain abilities and talents and are stuck with those and cannot develop any more, or a growth mindset and believe that they can change anything they set their mind to.

The good news, according to Tiffany, is that we can all develop a growth mindset because of the part of the brain called the prefrontal cortex, better known as our brain’s control panel – and we are in charge of the controls.

One of the ways we can strengthen our character and become more of who we want to be (including developing a growth mindset) is to simply stop before we act and ask ourselves, “Is what I’m about to do really a reflection of who I am and who I want to be?” If the answer is no, do something else.

Another way to develop your character is to choose a character quality you’d like to work on and commit to being aware of and practicing that one quality for an entire week. For example, if you want to be more generous, you might want to give your change to a homeless person, or give a tithe to your favorite charity, or offer to babysit the children of your friend who is a single mom. You can do this practice with your children. You might encourage them to share their potato chips with a classmate or let their brother watch his favorite show even if it means missing theirs.

You can even help shape other people’s character by appreciating the character strengths in them.

So what character qualities would you like to develop? Enthusiasm? Perseverance? Kindness? Honesty? Humility? Fairness? Self-control? Gratefulness?

Today, let’s commit to focusing on one quality each week and see what miracles unfold in our lives.

Let us know what happens! 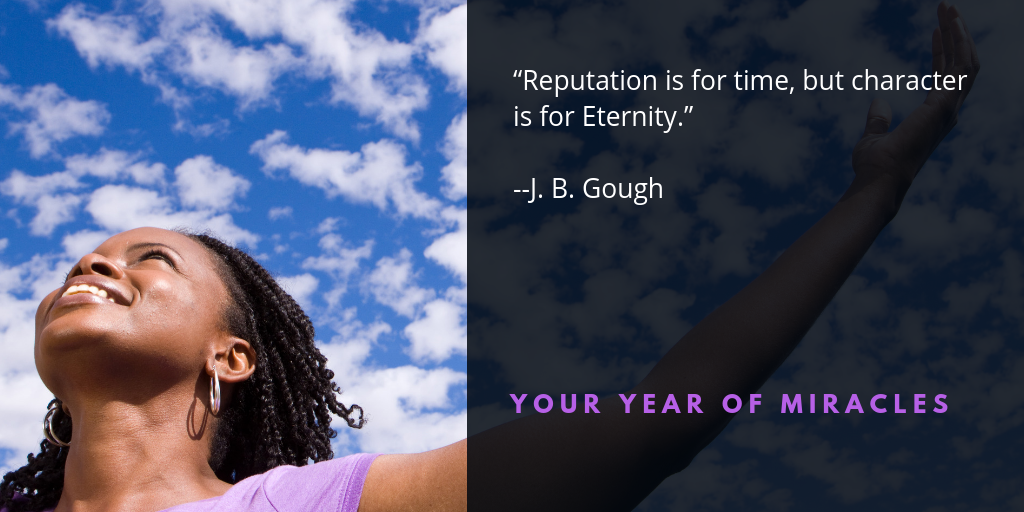