Today’s Miracle Moment is about the miraculous power of trust.

Wouldn’t it be nice to live in a place of complete surrender, a place where you profoundly trust that you’re being taken care of by a Universal power at every moment? To live with certainty that the Universe is really out to support you…That it’s on your side and has your back…

We know that that seems like a big stretch to believe 24/7/365…but let’s lean into it just for the moment.

We often try so hard to control everything in our lives that we forget the power of putting our faith in the universe, and in letting go. But once you get into the habit of doing all that you can from your humanness, and trusting when you get that intuitive message “it’s time to let go and surrender to a Higher Power” and you you actually do it, you’ll begin experiencing a deep sense of peace and of well-being.

Throughout history, the wisest men and women have known that their highest good came from surrender.

Not the kind of surrender as in losing a battle surrender, but as in letting go of their personal limitations and aligning totally with an intelligence and an energy that’s greater than themselves. The energy of: “Let Thy Will Be Done.”

If you can do this, it creates something that we call a “yes mind.”

Now what’s a “yes mind?” Basically, instead of saying no and resisting everything that’s happening, simply say “yes.”

I (Marci) had my first experience of a “yes mind” when I took an improvisational acting class many many years ago, and they had this practice that at first was really hard for me…

One of the rules of improv is to respond instantly and enthusiastically with a yes to whatever another actor throws at you. So during my first class, my improv partner told me that I was an elderly rock star. Instead of saying, “No no no, I can’t do that,” I immediately started playing the part. I started strumming an air guitar, and clutching my lower back, and belting out lyrics as I gyrated like a ninety five-year old. When suddenly the scene switched. And I was an alien coming to earth to rob a bank, I just had to go with it.

This exercise broke my boundaries and freed up my energy, and I found that it was a great practice for living life. When you say yes, it’s like being a trapeze artist – you’re able to let go of the trapeze you’re holding on to, and sail through the air towards the next one. Without letting go and trusting the next one is there, forward motion just isn’t impossible. So it’s surrender and trust that creates a feeling of flow in every moment.

Now, we acknowledge that sometimes things happen that are not the way we want them, like we let go a bit before the hands of the other trapeze artist are there to catch us, but we also know that there’s an intelligence in the universe that’s bigger than us…an intelligence that can see things in ways that we can’t…an intelligence that just wants you to hear it when it’s telling you, “Don’t worry, I’ve got this one.”

Here’s an exercise that we invite you to try.

It’s an exercise of acting from from saying yes to what the universe brings you and being led by your soul surrendering throughout the day. This is an exercise that was adapted from A Course in Miracles, and here’s what you do…

When you act on the intuitive answers that show up and follow them trusting that spirit is guiding you and has your back, you’ll find yourself living more and more in the miracle zone.

Debra and I wish you many moments of trusting, surrendering, and living in in the Miracle Zone until we’re together again. 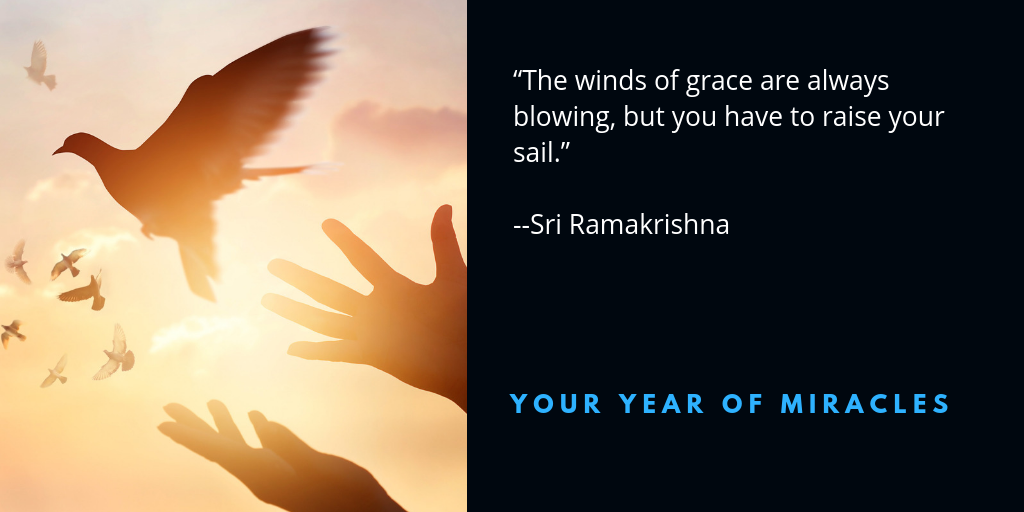